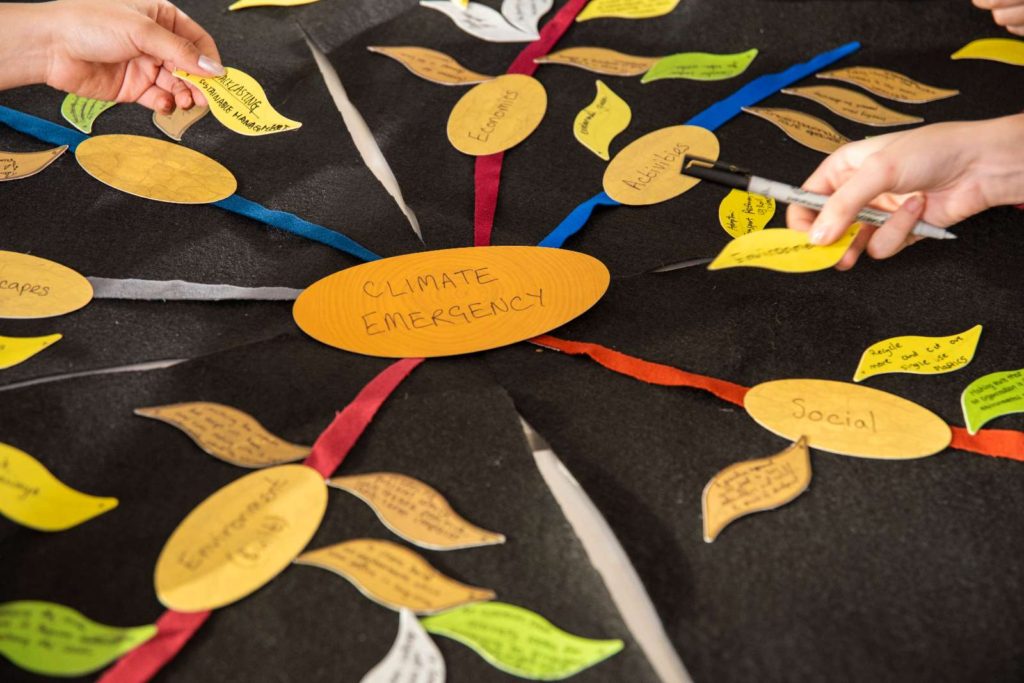 In April 2019, young climate activist, Greta Thunberg said in the UK’s Houses of Parliament: “The moment we decide to fulfil something, we can do anything”. We already know of many actions we can take to slow and counteract escalating climate change, and there are likely plenty of ideas that have not yet been explored. Ketso gives a way for people to surface and share these ideas, which is why it’s increasingly used in discussions about climate actions, from local communities to government level.

Ketso’s use and usefulness in climate discussions is precisely why it has been chosen as a tool for developing climate action plans, from its home town of Manchester to as far away as Barbados. A recent report involving 11,000 scientists from 153 countries says that we are facing a climate emergency with ‘untold suffering’ if we don’t change the way we live as a society, and the UN has just released a new report warning of the need for urgent action.

Radical and effective ideas are needed, as deadlines for halting escalating climate change are worryingly tight. Arguably, many of the predicted impacts are already happening. You can scan the news and find evidence of unprecedented environmental disasters, such as large-scale wildfires, heatwaves and floods. The situation is likely to escalate, as we are informed by the IPCC that we will speed past a 1.5 degrees C global temperature rise in as little as 10 years, if we keep going as we are. The scale of possible impacts, from sea level rise to increased flooding and wildfires, means that our world could look nothing like it does today.

There is arguably no other subject as important to our future. But we have a real opportunity to respond creatively and develop new thinking. Ketso is a vital tool for imagining alternative futures.

For us to make those vital changes, we need to pool our knowledge and listen to each other’s ideas. Ketso offers a workshop methodology that means all the ideas of those in a group are harvested, explored and discussed. This is a powerful aid to decision-making and plotting roadmaps with actions.

Used by communities and countries

We have many examples of how Ketso has been used for sharing, recording and actioning group ideas to combat climate change. For example, Ketso was used to develop a climate change strategy by the government of Barbados. Rising sea levels and flooding poses a direct threat to the island. Flood and disaster management, as well as land use were discussed by 20 stakeholders in an initial group session, with Ketso as the central tool for ensuring effective collaboration. More recently the City of Alameda, in the San Francisco Bay, used Ketso to gather ideas on complex challenges related to reducing carbon emissions locally. They specifically were attracted to the tool because it meant all voices at the table had the space to participate equally, and it would be satisfying and engaging for all those contributing. In fact, it’s been used many times around the world to find ways to reduce carbon footprints and to build resilience to climate change.

“To make climate change mitigation plans happen, you cannot always dictate what people should do, you should involve everyone who is potentially affected by the decisions, to have a say.”

The City of Alameda in the US, resilience planning with Ketso to locally reduce impacts on climate.

A key point to know about Ketso is that it works well when you have very different kinds of people in a meeting, from those with perceived low and high status, loud or quiet voices, and it makes everyone equal for the length of the workshop. To make climate change plans happen, you cannot always dictate what people should do, you should involve everyone who is potentially affected by the decisions, to have a say. Whilst you can always choose to interview people randomly, or ask people to fill out survey forms, there is an added quality to a discussion when everyone involved works through the challenges and ideas together in a room, but in a way where they have to both contribute and collaborate to progress to conclusions.

With Ketso you collaborate together in real time in the same space, and it is more interactive, connected, with to-and-fro momentum. Workshops are inspiring. New ideas blossom organically in the moment, ideas that could have never emerged otherwise. Another major advantage of Ketso is that you can engage with many, many more people in a meaningful and enjoyable way than with traditional methods. Workshops can be small or with hundreds of participants, all focussing on the same core themes and issues at once.

Ketso literally means ‘action’, and its very design means the mind-set of the users is to ‘grow’ solutions together on ‘branches of a tree’, writing their ideas on ‘leaves’. The team at Ketso have a real love of the natural world and a commitment to developing inspiring ideas to combat the climate emergency. You can download a workshop plan for developing a climate change plan, and slides teaching about climate change mitigation, here.

Find out how Ketso can be used for your workshops on climate change mitigation. Contact the team at Ketso.

Previous Post
Ketso: A tool for understanding changing perspectives in Brexit
Next Post
A story to warm your hearts for Christmas
Wishlist 0
Continue Shopping